A recent NASA mission to the dwarf planet Ceres found white spots of salts on its surface. New research led by The University of Texas at Austin in partnership with NASA’s Jet Propulsion Laboratory (JPL) delved into the factors that influenced the volcanic activity that formed the distinctive spots and that could play a key role in mixing the ingredients for life on other worlds.

The volcanoes on Ceres are cryovolcanoes, a type of volcano that forms on planetary bodies with icy shells and that moves salty water known as cryomagma from underground reservoirs to the surface. Scientists think that cryovolcanoes on Jupiter’s icy moon Europa could help foster chemical mixing that could make complex molecules needed for life. Learning more about how these volcanoes work on Ceres’ which is a simpler geological environment than Europa’s could help scientists get a handle on the primary forces that drive their activity.

At 585 miles across, Ceres is the largest planetary body in the asteroid belt between Mars and Jupiter. Forged billions of years ago from rock and ice and far enough from the influence of other planets, scientists had thought that Ceres’ days of active geology had come to close. But the NASA Dawn mission changed that view when the space probe sent back pictures of bright, white spots at the bottom of impact craters. The spots turned out to be the remnants of cryomagma.

The location of the spots at or near the center of crater basins suggests that the heat and energy generated by asteroid impacts could jumpstart geology on Ceres, creating reservoirs of cryomagma that were then brought to the surface by conduits such as fractures.

The new research looked specifically at the deposits on the floor of the 90-mile-wide crater Occator, which was formed about 20 million years ago. However, the deposits here are as young as 4 million years old, indicating a relatively recent formation geologically speaking with respect to the crater itself. Earlier research conducted by other scientists found that the conditions on Ceres wouldn’t allow for the cryomagma generated by the Occator impact to exist for more than about 400,000 years. 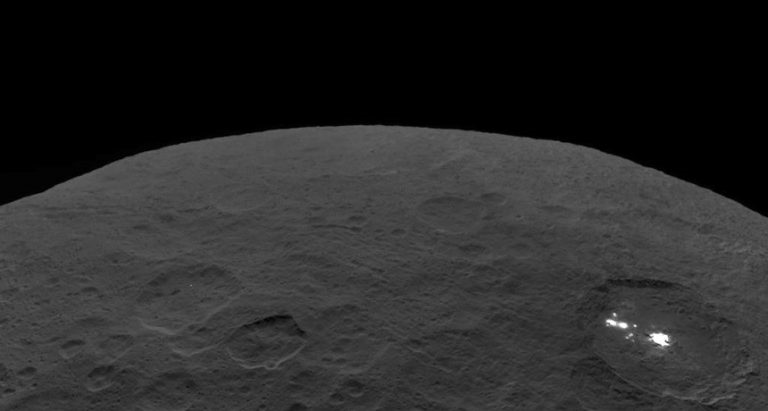