From Bruce Elmegreen at the IAU meeting in 2018 in Vienna:

The main motivations of the Resolution B4 are:

It should be stressed that the Resolution does not formally establish a new name of the “Hubble law”, but simply suggests that in future discourses the formulation “Hubble-Lemaître law” is preferred.

We wish to highlight an excerpt from the paper by David L. Block “Georges Lemaître and Stigler’s Law of Eponymy” which reports an interesting comment on the matter by Lemaître himself:

“In a Comment published in Nature Mario Livio (Nature , 479, 171, 2011) has unearthed a letter from Lemaître to W. M. Smart (dated 9 March 1931). From that document, it is clear that LemaiÌ‚tre himself translated his 1927 paper into English and who also omitted his determination of the coefficient of expansion of the Universe (H0) from values of radial velocities available as of 1927. However, in his Comment Livio omits a vital reference, namely thoughts penned by Lemaître himself in 1950 (L‘expansion de l’Univers, Bibliographie: Annales d’Astrophysique , 13, 344):

About my contribution of 1927, I do not want to discuss if I was a professional astronomer.
I was, in any event, an IAU member (Cambridge, 1925), and I had studied astronomy for two years, a year with Eddington and another year in the U.S. observatories. I visited Slipher and Hubble and heard him in Washington, in 1925, making his memorable communication about the distance [to] the Andromeda nebula. While my Mathematics bibliography was seriously in default since I did not know the work of Friedmann, it is perfectly up to date from the astronomical point of view; I calculate [in my contribution] the coefficient of expansion
(575 km per sec per megaparsecs, 625 with a questionable statistical correction). Of course,

before the discovery and study of clusters of nebulae, there was no point to establish the Hubble law, but only to calculate its coefficient. The title of my note leaves no doubt on my intentions: A Universe with a constant mass and increasing radius as an explanation of the radial velocity of extra-galactic nebulae. I apologize that all of this is too personal. But, as noted by the author (p. 161) “the history of this science competition is not irrevelant” and it is useful to highlight the details to enable an exact understanding of the scope of the argument that can be drawn from this. (Emphasis added)

In 1950, Lemaître clearly did not want the rich fusion of theory and observations contained in his 1927 paper to be buried in the sands of time.

Concerning point 6 in the Resolution, we wish to highlight an interesting comment by Virginia Trimble which suggests that the expression “actual interest” used by Lemaître in his letter to MNRAS is a poor translation into English of the French “inteÌreÌ‚t actuel”. It should therefore be better interpreted as “current interest”. 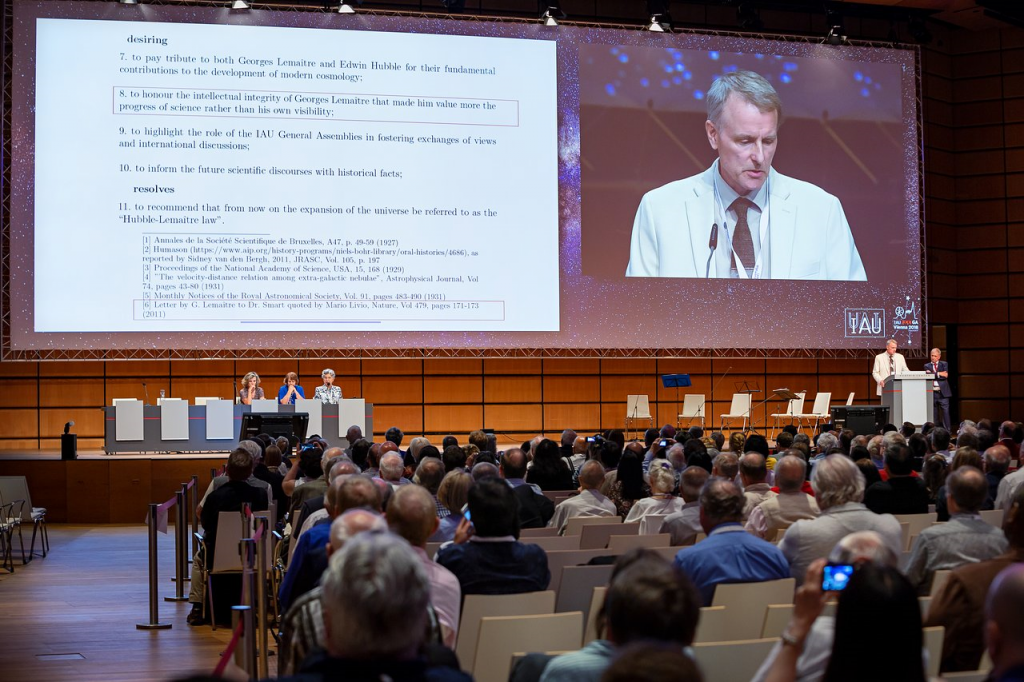